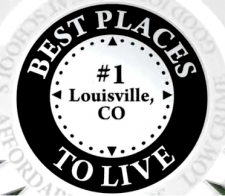 About Louisville & It's Neighborhoods

Louisville is a small community immediately east of the City of Boulder. Louisville offers quick access to Boulder, Westminster, and Denver.

The town of Louisville is laced with nearly 30 miles of trails, and its location to Rocky Mountain National Park is less than an hour away, with 8 world-class ski resorts within two hours.

With its close proximity to the multitude of vibrant industries such as high tech, energy, and science, Louisville's location is among the best on the north side of the Denver Metro Area.

In 2009, CNN Money ranked Louisville as their top choice in the best places to live that year. Its schools are served by the highly rated Boulder Valley School District. If that’s not all, Louisville has always been known to have some of the best ‘authentic Italian’ restaurants in the region, well before it became a popular place to live.

Homes In Louisville For Sale

View these Louisville homes for sale

Zip codes for Homes In Louisville neighborhoods are: 80027

If You'd Like More Information About Homes In Louisville,
Just Call or Email: