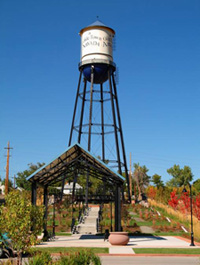 About Arvada & Its Neighborhoods

Arvada has a history that goes back well over a hundred years.  Arvada is the home of Colorado's first gold discovery on Ralston Creek.  Today, Arvada has grown to well over 100,000 residents and has become one of Colorado’s most popular suburbs.  Despite its size though, Arvada still retains that small home town feel.

Arvada is located near the northwest corner of the Denver Metro area.  The city offers convenient access to Denver’s foothills and all sorts of mountain recreation, but the city is only a short (30 minute or less) drive to downtown Denver.  Arvada has built a significant park, open space, and trail system that connects with trails into Denver, and then west into the Colorado Rocky Mountains.

The watertower pictured to the left is in 'Watertower Park', and connected to that trail system.  Arvada is home to its own center for the arts, which has become one of the Denver area's largest cultural attractions.  The ‘Arvada Center’ offers first rate theater, concerts, dance, art shows and historical exhibitions, conference facilities, and more.

One of the key factors to Arvada’s small town feel is its annual fall 'Harvest Festival', which crowds Arvada’s Olde Town district, and which has become a community tradition for nearly a century. If you are interested in living in Arvada, take a look at the many excellent homes in Arvada, below.

Homes In Arvada For Sale

View these Arvada Homes for sale

If You'd Like More Information About Homes In Arvada,
Just Call or Email: