Alamo Placita is one of several popular inner-city denver neighborhoods.  Alamo Placita Park has often been called Denver’s most ideal and most beautiful park. The name "Alamo Placita" commemorates the many cottonwoods that grow naturally in this area. A few of the original and oldest trees can still be found in Alamo Placita Park, throughout the neighborhood. During Denver's urban rediscovery over the last couple of decades, there has been a renewed appreciation and respect for the original architecture in many of Denver's most established neighborhoods.  Alamo Placita offers home buyers a variety of Foursquare's, Bungalow's, Tudor's, and Spanish Mission-style residences.  In recent times, the Denver Landmark Preservation Commission recommended designation of the Alamo Placita Historic District because of the significance of this denver neighborhoods history, and architecture.  Search homes in Alamo Placita.  Search all Denver Homes. 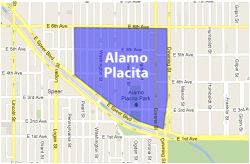 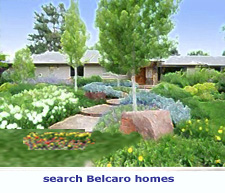 Belcaro, gets its name from the spacious 33,123-square-foot, 54-room red brick Georgian mansion of Lawrence C. Phipps, who also served as one of Colorado's most eminent United States Senators. Today, Belcaro is one of a few denver neighborhoods that is dominated by many large ranch-style houses, all situated on large lots and spendid tree-lined streets.  Adjacent to Belcaro is the large gated community known as the Denver Polo Grounds, and which is located along the northern portion of this prime denver neighborhood.  Search homes in Belcaro.  Search all Denver Homes. 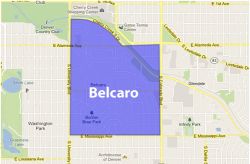